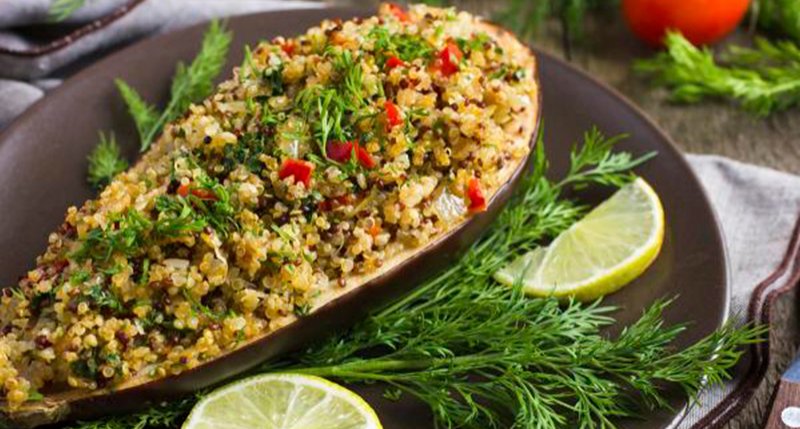 Preheat the oven to 180 ° C. Wash the eggplants, remove the stems and cut them in half lengthwise. Make several rhombus-shaped cuts in the meat, oil them and put them on a baking sheet lined with sulfurized paper. Put the tray in the oven and roast for 30 minutes.

Peel the garlic and chop them in brunoise, that is, in small cubes. Peel the onion, cut it in half and, resting the flat part on the cooking board, cut it also into brunoise.

Wash the pepper, cut it in half and remove the stem and seeds. Support the skin on the board so that the knife blade works on the fleshy part (it can slip on the skin and cause a small accident) and cut it into squares neither too large nor too small.

Put the quinoa in a colander and wash it under running water for a couple of minutes. Drain it when you're done. Put a pot on the fire with an amount of water six times higher than you have quinoa and wait for it to boil. Then put the quinoa in the pot and let it cook for 15 minutes. When tender, strain it and set aside.

With the help of a spoon or a knife, empty the eggplant halves of your meat and cut it into small squares on a cooking board.

Heat a little oil in a pan and sauté the garlic until they begin to acquire a golden hue. Then add the onion and, when it becomes transparent, add the peppers and sauté everything until it is tender. Add the quinoa and the eggplant meat, season with lemon juice, parsley and dill to taste, add salt and pepper and cook for three more minutes.

Remove the pan from the heat and distribute its contents inside the eggplant "boats".

We aim to keep you informed

In this section, we will keep you abreast of the latest arrivals as well as news and events taking place in the Market. You can also contact us through our different social media sites:=

We use our own and third-party cookies to optimize your visit and improve our services by personalizing our content and advertising based on the analysis of your browsing habits. If you continue browsing without changing your browser settings, we consider that you accept their use. More information in our Cookies Policy OK